A shard dungeon is a more difficult variant of an existing dungeon with enemies at or above level 30. Additionally, upon using a shard a 30 minute timer will start and a completion percentage will be displayed. If both bosses are defeated and enough enemies are killed to complete the dungeon within the time limit the shard will gain a level. If the dungeon is completed in less than 15 minutes the shard will gain 2 levels. If the timer hits 0 before both boss chests have spawned and 100% completion the shard will go down 2 levels and disappear if below level 1. Shards dungeons range in difficulty from tier 1-15 based on the shard used to invoke them and provide different tiers of rewards based on difficulty. Dungeons can be completed after the time has elapsed to still gain loot but mob groups respawn after an hour and may need to be recleared to reach the boss.

The shard returned at the end of the dungeon and all gear dropped are temporarily tradable between party members while still within the shard. Gear above one's level will apply stats equal to gear of the character level in addition to the + bonus and will scale as they level. ex: 30+2 gun used by a lvl 18 scoundrel counts as a 18+2 (lvl 20) gun.

+3 or higher Weapons will have affixes(link here)

Shards are acquired from defeating a boss in any unsharded dungeon. Shards will only appear in boss chests if the currently equipped class upon boss death is level 30 and there are no shards in the players inventory. Shards can be accumulated by a player if they are stored in the player house before starting each dungeon. 2 shards will drop in a dungeon if a player waits to open both boss chests until both bosses are dead.

Minor mutations remain active during boss fights while Major and Brutal Mutations do not unless otherwise stated.

Additionally, the major mutations will rotate each week and remain constant across all shards for that week. 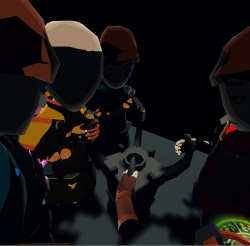