Sarrow's Cave: Location for a few of the starter Lore Quests, in Northwest Highsteppe.

Chaos Portal: Top of the plateau, a giant rock formation that acts as an event.

Refer to the Highsteppe Bestiary for more information.

A small and unassuming village in the Midlands of Patreayl. Highsteppe is built on the step-like foothills of Mount Drer. The village may not look like much, but it has been the birth-place of many a hero in the past. Namely, Guardian Bart who came to prominence during the violently fought Dandelion Wars.

The town is looked after by the noble house of Lenneth (family).

Highsteppe is where new adventurers appear in the world. Adjacent to Cenn's Farm and containing an airship dock which ferries adventurers to various locations throughout the country.

The first house that players acquire is located in Highsteppe.

Home of the flamboyant and philanthropic Marcell Cenn, Cenn's Farm grows almost exclusively Parathimian Sunflowers - a rare commodity, normally found only in Parathime. With the Sunflowers he makes his famed "Parathimian Cigars", which has, in recent times become a major source of income for Highsteppe's economy. The farm is located on the outskirts of Highsteppe, and has been having issues with Redtails ruining the crops for some time.

Lakewood Inn is a popular rest stop for travelers in the north-east of central Patreayl. Run by a couple, the main draw to this rustic tavern is the beautiful Barmaid Jasan, and her boorish husband Dosa. the Inn is well known as a place where you can warm yourself against a fire, buy cheap ale and devour a hearty stew. The Inn has been a bit tense as of late due to The Order Blockade along Khabor's Pass, which lies just up the road causing many unsavory Order-types to frequent the establishment.

The oldest human settlement in all Patreayl, Kingsport was once the capital of the country when it was ruled by a monarchy, thousands of years prior -hence the name King’s-Port. Situated on what was once a large island in the center of Kingsport Lake, Kingsport was an ancient city that’s entire economy revolved around the fish that they harvested from the waters. Known historically for its innovation in technology, Kingsport for a long time was the jewel of Patreayl. However, it lost its claim to fame when a catastrophic flood caused the lake to swallow up most of the city killing thousands. Many who survived chose to flee the area, claiming the cities destruction was due to a curse brought upon them by the allegedly “devil-worshiping monarchy.” They fled and eventually went on to found Guild City, while others fled to the Rainforest to found New Kingsport. However, some loyalists to the dead King remain to this very day on the tiny spit of land that was never swallowed by the waters, they are a foul, inbred group, unfriendly to outsiders. Rumors fly that they still practice pagan rituals and worship something that dwells deep beneath the water.

A large forest to the north-west, near Leisa Falls. This forest holds a rather terrifying reputation amongst the locals. They say that a mysterious “Green Lady” roams the trees, the spirit of a spurned lover, perhaps. Whatever she is, she is hostile and will take anyone who encroaches on her territory off into the undergrowth, never to be seen again. They say that if you stick to the path, the Green Lady cannot touch you, but that she’s a deceptive spirit and will use flashing lights and all sorts of tricks to cause you to stray from the path. 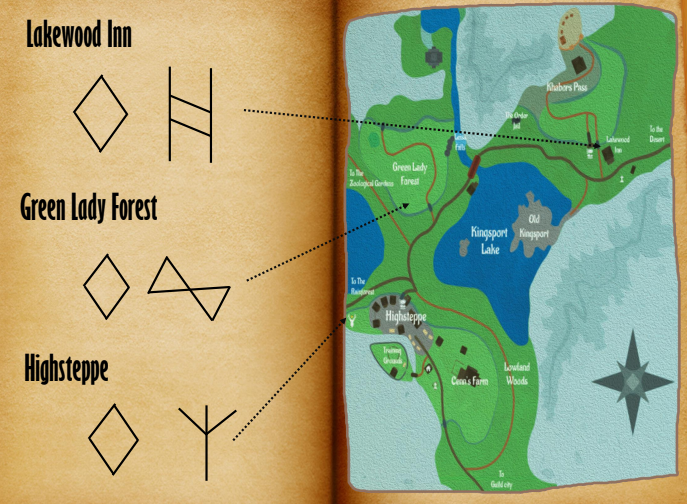